Just like any diet you need to splurge sometime and I did that tonight. It was steak and wine night tonight so I am doing exactly the opposite of what a good long haul drinker should. Tomorrow I am the designated driver for another Livermore winery tour so I might as well drink tonight.

Anyway, I drink at least 44 oz. of 8-10 percent imperial ale most every night. If I do it right I feel good in the morning. My bigger problem isn’t how much I drink but if I stay up until 3am while doing it. I suck down water in between. 1 to 3 beer to water ratio is recommended but I do more that that. Don’t say “fuck it” and forget the water. It is important if you want to feel like drinking the nest day.

Vitamin B is the most important supplement. Alcohol squeezes all the nutrients out of your cells as it dehydrates you. You need to put the B vits back because the liver needs them to process the alcohol. The liver also has to work hard to digest red meat which is why you shouldn’t drink heavily and eat steak at the same time. I won’t feel great tomorrow but the water and B will help greatly. I also buy Milk Thistle at Trader Joe’s. I didn’t take it for a while because it is expensive but Trader Joe’s price is okay. 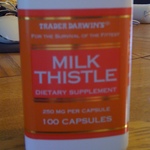 Get the B vit with a lot of extra stuff in it like Ch…. I forget how to spell it, but I remember the book says it is important. Also, don’t get B vit with C vit in it because you can have too much C, but you don’t have to worry about taking too much B vit.

It helps to eat all of the nutrients you need before you start drinking. Your body needs food so eat everyday. However, it’s best to wait three hours after you eat before you drink. Also, stop drinking for one hour before you start eating again. This is the toughest part, but it makes a big difference. Drunk people do dumb stuff like eat an entire bag of potato chips or snack on bad stuff. However, if you follow the no eat rule you will wake up feeling good as long as you drink water. It’s easier not to eat when you drink heavy/ hoppy beer. Otherwise just nibble on some strong cheese. Just don’t go crazy and eat a bowl of ice cream or something dumb like that. Quinoa Is the greatest food when you are drinking. It’s light but has a lot of protein. It satisfies the hunger for heavier more damaging food.