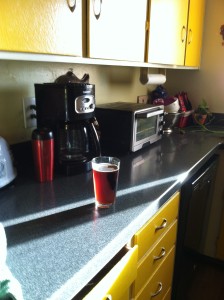 Poured from a bottle of New Almaden Red from Santa Clara Valley Brewing. It’s as good as it looks!

Five years after they said it was gone for good Lagunitas Imperial Red came back again. This time it is in 22oz. bottles. Sure I’m happy but there is so much going on in the brewing world that my days of driving to three neighboring towns just to stock up on the stuff are over. When Lagunitas Imperial Red returned briefly a couple of years ago with the same taste and aroma, but with a lighter body I sent an email to the brewery to ask about the change and they replied that they would forward my thoughts to the brewer – so, obviously I am chiefly responsible for it’s triumphant return! Not only is it back to its old form but it is also one of the least expensive of the Imperial Reds.

It’s no longer difficult to find Imperial Reds. There used to be 4 or 5 that I knew of, most of them seasonal and hard to find, now I’ve had over 20. I made a shrine of the best ones that come in bottles, on a shelf in my garage. I was going to do a little review of every Imperial Red I’ve found, but that isn’t really my forte. I don’t have talented taste buds and I tried to brew my own Imperial Red and, for the most part, I failed so I’m not really qualified to review beer.

To be honest, I like it all, though sometimes a beer will really stand out. One time at Santé Adarius in Santa Cruz. I had a surprising pale ale. Usually pale ale is the least exciting beer on the menu for me. However, this pale ale had four distinct stages of flavor, nothing dominated. It was as if the flavor of hops and barley had been injected into a stream of their purest mountain water. (Yes, I’m joking seriously here. Reviewing beer is like reviewing punk rock. What more can you say other than it fucking rocks!) For a second I thought maybe the ocean air was cleansing my taste buds, but the place is right next to the freeway. However, the next time I went back there they only had sours and dark beers on tap. This seems to be a common trend with really good brewers who have been brewing beer for a lifetime, they move on to the sours.
As much as quality I just appreciate brewers that really go for it with at least one of their beers because I like variety as much as consistency. Not all beer should be for everybody.  I always want to check out something different. If a beer is named after a flavor I want to taste it. I don’t like just a touch of this and that. For instance, that same day, at Santa Cruz Mountain Brewing, I had a good Rosemary IPA. The bartender tried to give me a sample and warned me that the taste of Rosemary was too strong for some. I was glad to hear that and said that I didn’t need a sample. In the same way I believe a chili pepper beer should clear your sinuses and bring tears to your eyes.

Similarly, and it didn’t bring tears to my eyes, but my favorite new beer during the Pleasanton Brew Crawl was Ballast Point’s Habanero Sculpin. It tasted exactly as advertised. I asked for the bottle so I could take a picture of it for brewznewz, but Keri said, “don’t just take a photo of the bottle, you should have her hold it up for you.” Good call by the wife.