I bought this barley wine because it has a picture of a cardinal on it. I like pictures of birds. I like colorful birds. I have to admit that Ravens and Crows are much cooler birds. However, if I could pick a bird that I wanted to find on a beer label, I would pick the Scarlett Tanager. That is one handsome motherfucking bird.

I like breweries because I feel like I belong in most breweries. Brewpubs usually have wood tables instead of tablecloths. The ages tend to range a little higher and lower. If I see a combination of grey hair and younger couples with toddlers in tow then it’s probably my kind of place. The weekend after we checked out three new breweries in Sacramento we were back the next week and that time we went old school again with Hoppy Brewing Company. They had all kids meals for just $1 on Sundays. Yeah!

Plus, in other old school value for your dollar brewznewz, Davey’s band the 4 Eyes played at Sacramento Bicycle Kitchen the night before and they were selling River City Brewery Beers for $3 a pint.

(Special thanks to the man Charles Albright for actually giving me his gun range ear protection for the show. I brought mine, but my son was wearing it.)

Then last week we were in Sacramento again for the third weekend in a row. We were there for yet another roller skating birthday party. It was a lot of fun. I didn’t skate because I am an old man and I know better.
Afterwards I just happened to know that American River Brewing  is 12 minutes south of the rink. The wife and I stopped in there and it was exactly my type of place. The beer there is really great too! They also had a barley wine in bottles that wasn’t on tap. Some night when people are over I am going to open it at the same time as the barley wine with a bird on it so we can compare. Good times.

I’m really into getting old. I want to seem older than I am. I’d like my hair to turn grey. Right now, at age 47, I’m not young enough that being uncool can be ironic, but not yet old enough to get an old guy pass for being uncool. I wear my wife’s gun range ear protection on top of my earplugs when I go to the punk show. I know it’s not cool. When I truly achieve old man status I won’t care, and that will be cool.

She was wearing a v-neck but otherwise a pretty good artist recreation.

I also failed the brewznewz last weekend when I didn’t take a photo of the girl behind the bar at New Helvetia Brewing. I didn’t do it because she would have had a look on her face that said. “I’m smiling but I’m actually a little uncomfortable” and it would have spoiled the dress she was wearing. However, within another ten years I’m hoping to move on from creepy old dude to harmless old man and I’ll be able to take that photo.

New Helvetia Brewing is right in the middle of Broadway in Sacramento, a 3-block walk from my friend Davey’s house, just a little further down Broadway by car is a brand new Brew Pub called Oak Park Brewing. It’s in an area that used to be squalid and now it is nice. The place has a great big patio that was filled with people. They also had an imperial red for me. I took a picture of Davey here for brewznewz. Davey is the one that started this site, but so far I am the only writer he invited that actually posts stuff on here. He told me that spelling Brews News with ZZ’s was a joke, because Z’s are supposed to be cool. I don’t get it. 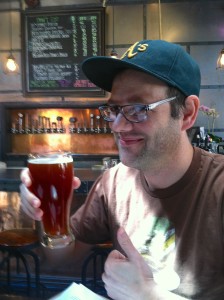 We also went to Track 7 Brewery because it was just a few streets away from a wine party we went to. We had to wait in line to get our growler filled.
The next day a group of us went back to New Helvetia (no, she wasn’t there this time) and the patio was filled there too. It looks like these new breweries are all doing well. That’s great! I love them! It’s especially great when you can walk there.
When we used to visit Sacramento several years ago I used to always lobby to eat at the breweries. We had to drive a little farther to a places like River City Brewing, Hoppy, or Brew it Up (RIP), but I knew when we got there we could get a big table for all of us and drink beer while we waited. Now it’s the opposite. The breweries are more plentiful and closer, but also more popular than ever. I’m hoping they all stay in business so if some get too popular there will be fall back breweries to take us old folks who don’t need to be at the very best place to be happy.

Drinking New Helvetia’s great Thurston Adambier on a Sunday with Karen, the wife, me, Lisa, Bill and Davey was back at the house with the seven kids we have between us.

Alvarado Street Brewery, I was trying to get the kids to wave at me, but they were a little embarrassed.

I’m happy to have a family that doesn’t mind leaving the house at 5 AM to beat traffic. We had plenty of time to check out Point Lobos and as we were leaving the park the line of cars to get in was over a hundred yards long (on a Tuesday!). A few stops later and it was time to have lunch at the new Alvarado Street Brewery in downtown Monterey. I was actually worried this place would be a little too fancy. The food prices looked a little high on the web site. However, it had a nice brewpub like attitude when we got there. They whipped out some kid menus and we got served right away. The beer was good too. Keri really liked the peanut butter stout. My favorite was the cinder cone. However, I couldn’t taste it after my taste buds got a little wiped out by the Habanero Ginger, very hot, very ginger.

The Peter B’s Brewpub is actually just a short walk away. I had been there before with Henry when I took him to the Monterey Bay Aquarium a few years ago for a Cub Scout sleepover. However the most memorable thing about going there at the time is that I loved the pint glass. It’s my favorite. I think because sentimentally I remember playing cards at my grandma’s house when she lived in Monterey. I read in the newspaper a while back that the place got a new brewer and had improved, but it didn’t open until 4pm so I just took a photo from outside. 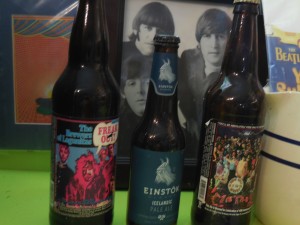 The Ice Cream Shoppe had the largest collection Beatle’s memorabilia I have ever seen, but I found the beer section.

Henry at Dennis the Menace Park

This is also the first time in a while that I went to Monterey and didn’t stop at the brewery in the neighboring town of Marina. I can get most of their beers at Trials in San Jose because they do the English Ales, but what I wanted is this year’s calendar of sexy local women, definitely worth stopping in for! As we headed back I knew the rest of the family just wanted to get home. Next time.