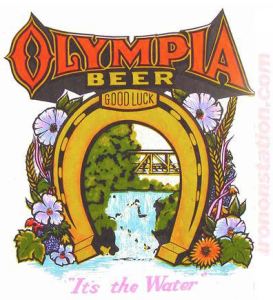 Lets start this column off with some men’s fashion tips. On the way to a brewery the other day Dave asked me “So did you wear those shoes on purpose to match your shorts?” He wasn’t making fun of me, but there was a hint of concern in his voice. I was wearing red shorts and red running shoes with a yellow XL shirt that had a red logo on it. Defensively I told him, “Yeah, I like bright colors.” However, the truth is that I knew I dressed like a child and it bothered me. Dave just said, “I only have this one pair of shoes and I don’t pay attention to what color things are.” Dave wears green shoes and goofball t-shirts, but somehow he looks like a grown-up. Noted, I need to stop matching.
I developed my fashion sense back in early 1970’s when colored t-shirts and iron on decals first became popular. Before that time stripes or plaid had been the only choice so having actual pictures on your clothes was stepping things up to a whole new level. There was an iron on decal shop on Main Street in Pleasanton and business was booming. Most of the boys liked the cool Ratfink type car decals. For whatever reason I liked the beer

decals better -the cool looking waterfall and nature stuff was my thing. There were a few different ones that I liked. One week I saved up the $3.50 and I tried to buy either a Coors or an Olympia decal. I don’t remember which anymore because I never owned it. Unfortunately, and I don’t know if he was an employee or just some stupid adult that happened to be there, but when I picked the one I wanted he said “Eh, that ‘s not a good one for a kid. Don’t you want to pick something else?” I was so young and stupid and this was back in the ‘70’s when kids listened to adults so in a deer in the headlights moment I just said “UH, okay.” And I picked the one right next to it. “Bud Man” a drawing of a goofy guy in a red Bud suit with a mask on. I figured the guy meant that a cartoon was more appropriate for a kid than a shirt with a waterfall on it. I didn’t even factor in that it was a beer shirt. It’s not as if the kid’s who bought the car shirts drove cars either.
I was in 3rd grade and had just been transferred across town to a different school. I don’t think they really cared about my shirt but the next day a couple of kids cornered me at the

drinking fountain. “Bud Man? Are you a Bud Man!??” As I thought about their question they slapped me a few times in the head. “You’re not a Bud Man! Do you think you’re a Bud Man?!?” I didn’t have an answer. If it had been something I cared about there would have been a fight, but I didn’t have a reason for wearing the stupid shirt. I was angry and humiliated but I wasn’t mad at the kids who were hitting me. I was mad at the guy from the t-shirt place! “Yeah, why did I buy this stupid shirt?! I didn’t even want this one!” The kids were right. I deserved to be slapped in the head. Lesson learned, I never wore that shirt again and that was the last time I ever listened to an adult. 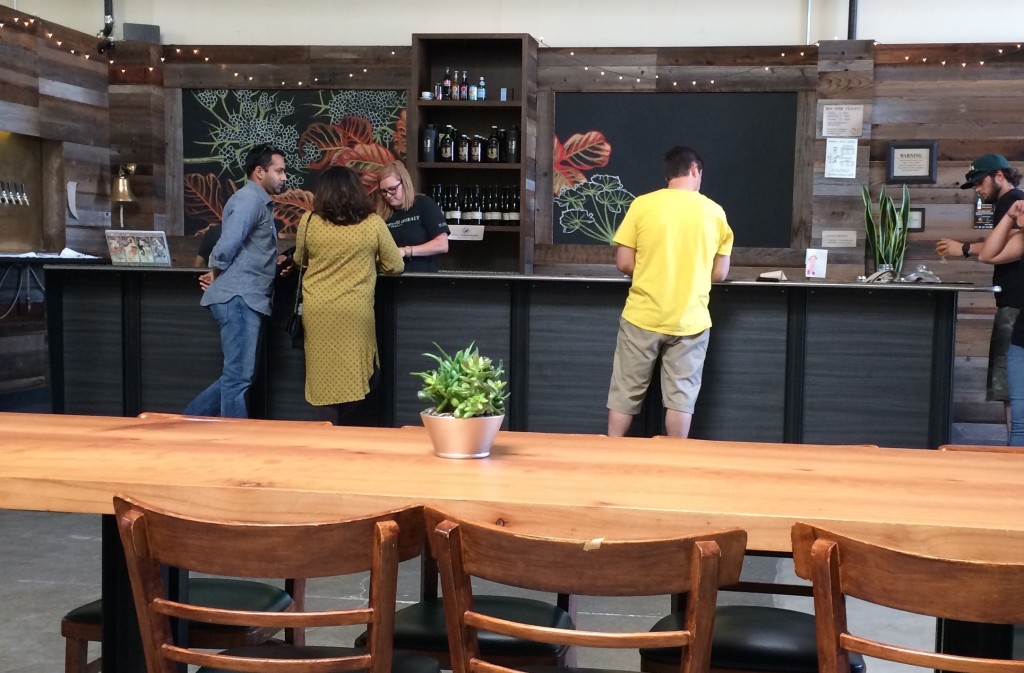 Featured Beer: Everything at Cleophus Quealy! The tap list is constantly rolling over because they never make the same beer twice, but everything we had here was fantastic. The only problem I have is, much like one of my other favorite breweries, Sante Adarius in Santa Cruz, it’s going to take a while before I get the name right in my head. It’s in San Leandro, right around the corner from Drakes. 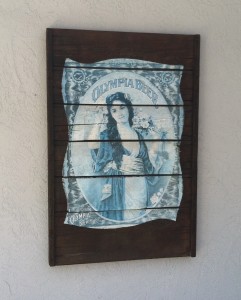 Pleasanton Brewz history.
For 30 years Pleasanton was home to the largest hop farm in the world. The 1900-acre Pleasanton Hop Company was in operation until 1913. That’s why the main road through the center of town is Hopyard Blvd. However, a much more shocking fact to learn is that in the early 1970s the city of Pleasanton consumed more alcohol per capita than any city in the United States! At the time it was a ranching town that was quickly transforming into Suburbia. The town had only three traffic lights, but there were 7 thriving dive bars on Main Street. The very last surviving bar from this era 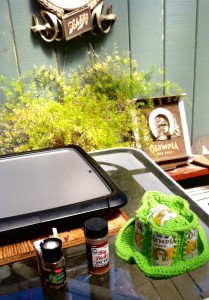 The art on our walls segment for this post is moving to the patio. We’ve been without a kitchen now for over three months. I’ve been doing most of the cooking on that electric skillet. To stick with the Olympia motif I threw that hat into the picture. I was wearing that hat the first time I ever talked to the wife. That night I swung hard and struck out, but you can see why she thought I was a catch.

was torn down this year. It was replaced with one of those new Starbucks that serve alcohol. I have never been a dive bar drinker and, I have nothing against Starbucks, but that just seems like the new school bully kicking dirt on the grave of old school.

The youtube post for this segment is appropriately Pleasanton based. Unfortunately the entire CD is not available on youtube, but if you listen to this one song over 40 times in a row you’ll get the idea. I met Your Mother when they were still in high school. I was certain once the world heard this CD they would take the world by storm. Lightning fast smart goofy funny punk rock that pummeled for 90 straight minutes. Then they told me the record label that was putting out the CD ran out of money. I said, “How much money would it cost?” They said $3500. I said, “I have a $6000 limit on my credit card!” And that is how Probe Records was born, 1995. www.yourmother.com 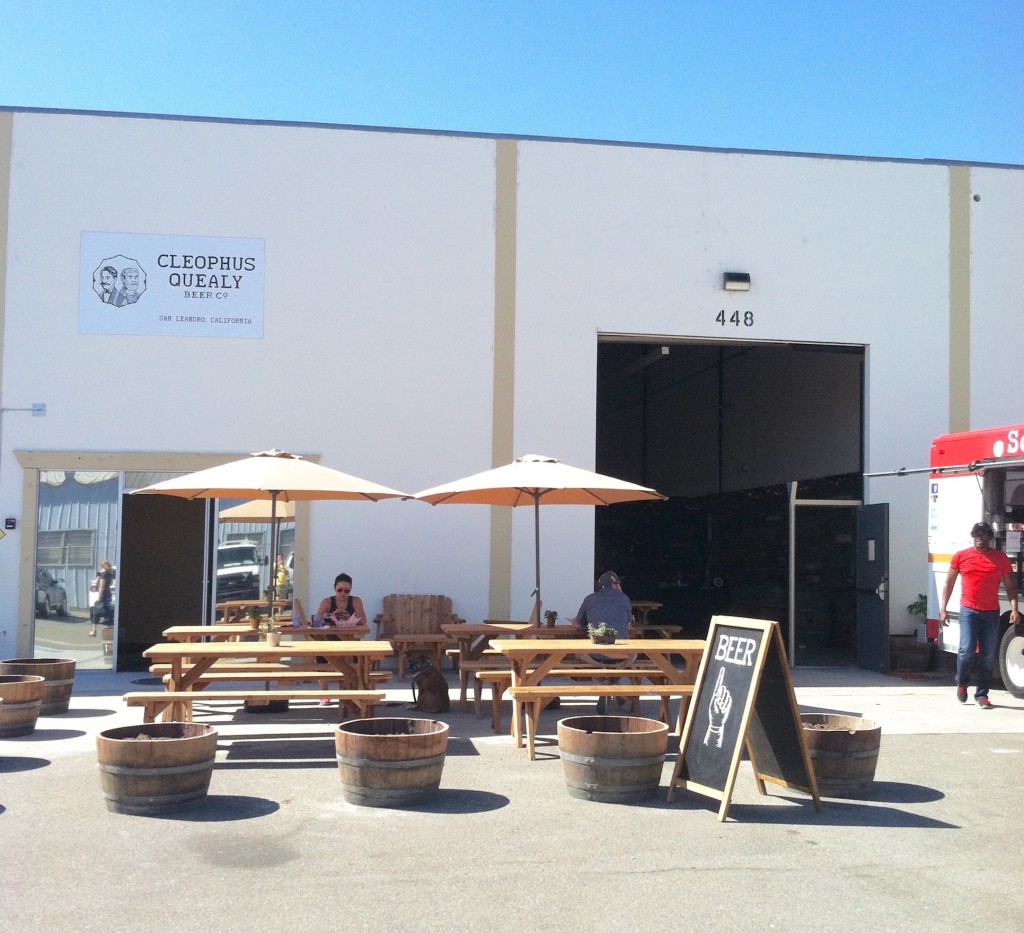